The 4 causes of knee pain in runners.

The 4 causes of knee pain in runners that has nothing to do with your knee AND what to do about it! 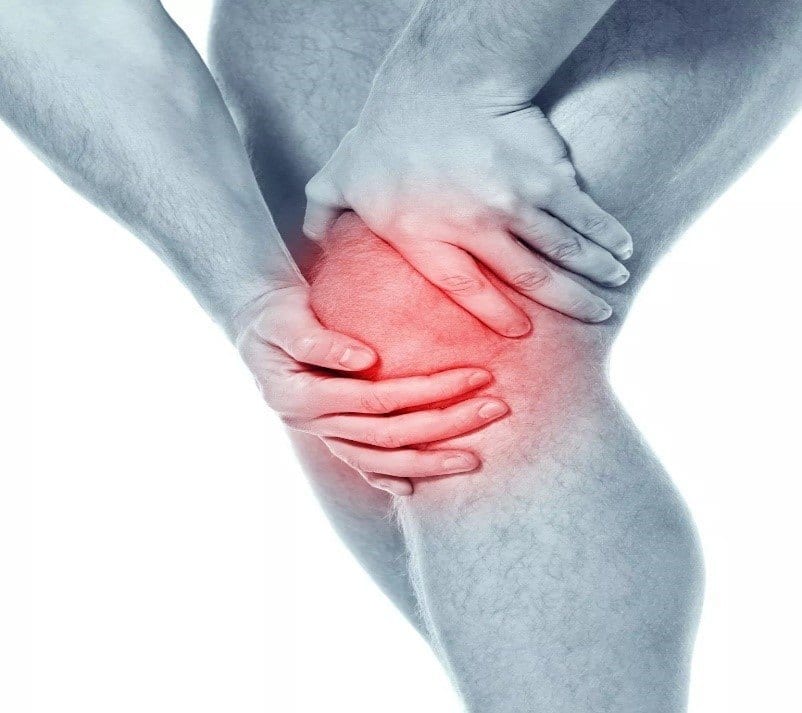 If you’re an avid runner and you’re suffering from knee pain this is an important article that could make the world of difference to YOU!

Knee pain is the most common running injury that we see in the clinic and it is one that is often incorrectly managed which means that people end up putting up with this condition for way too long.  If it gets fixed at all…

When knee pain is incorrectly diagnosed and treated in runners, many people simply give up running or are limited significantly by how much they can run or at the very least it makes running much less enjoyable.

Running should be fun and pain-free!

When you can identify the actual cause of your knee pain, it’s easy to fix and you can enjoy the feeling of running pain-free for as long as you want.

Unfortunately, we see many runners that have been putting up with knee pain for way too long.  They have either been trying to figure it out themselves or seeing another health professional who doesn’t understand the biomechanics of running.

They simply try to relieve the pain around the knee without correcting the underlying problem, which is often not in the knee itself.

Research into running injuries has repeatedly identified that the number one reason for why knee injury occurs, is actually due to the runner’s technique, which is the main focus of this blog.

Yes, that’s right there is a correct and incorrect technique for running.   It’s not something that many people think about. Most people just put on their shoes and start running.  There is nothing more instinctive than walking and running – how can you do it wrong!

But next time you go for a run at the local park, have a look at everyone’s different running styles. You’ll see some people running effortlessly and others look like they are struggling to climb a mountain, some are shuffling, some have gigantic strides.  Some are thrusting their arms back and forward, others are stiff like a robot.

If you ever wanted to run pain-free then keep reading. These 5 might just make the world of difference.

Overstriding is a common technical error for distance runners where their foot strike (foot hitting the ground) is a long way out in front of the body. When running as the foot hit 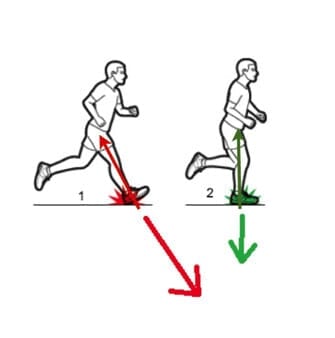 s the ground the impact is absorbed through each of the lower limb joints. When the foot strike is a long way out in front of the body the impact is significantly increased due to it absorbing the bodies momentum as well as the force from gravity.

Whereas a runner who has a foot strike underneath their body, they only have to deal with their own body weight rather than absorbing momentum and then having to recreate that force.

Running all comes down to efficiency and minimising the strain on certain parts of your body, thus the less impact the body has to absorb the more efficient a runner will be and less chance of knee injury.

To combat this issue try increasing your step rate (taking smaller steps) and try to have foot contact with the ground underneath the hip. You can re-train this yourself by using a metronome while your running. Once you find a beat per minute where each beat matches up with each step, increase that number by 5-10% and then keep trying to match up with the beats. 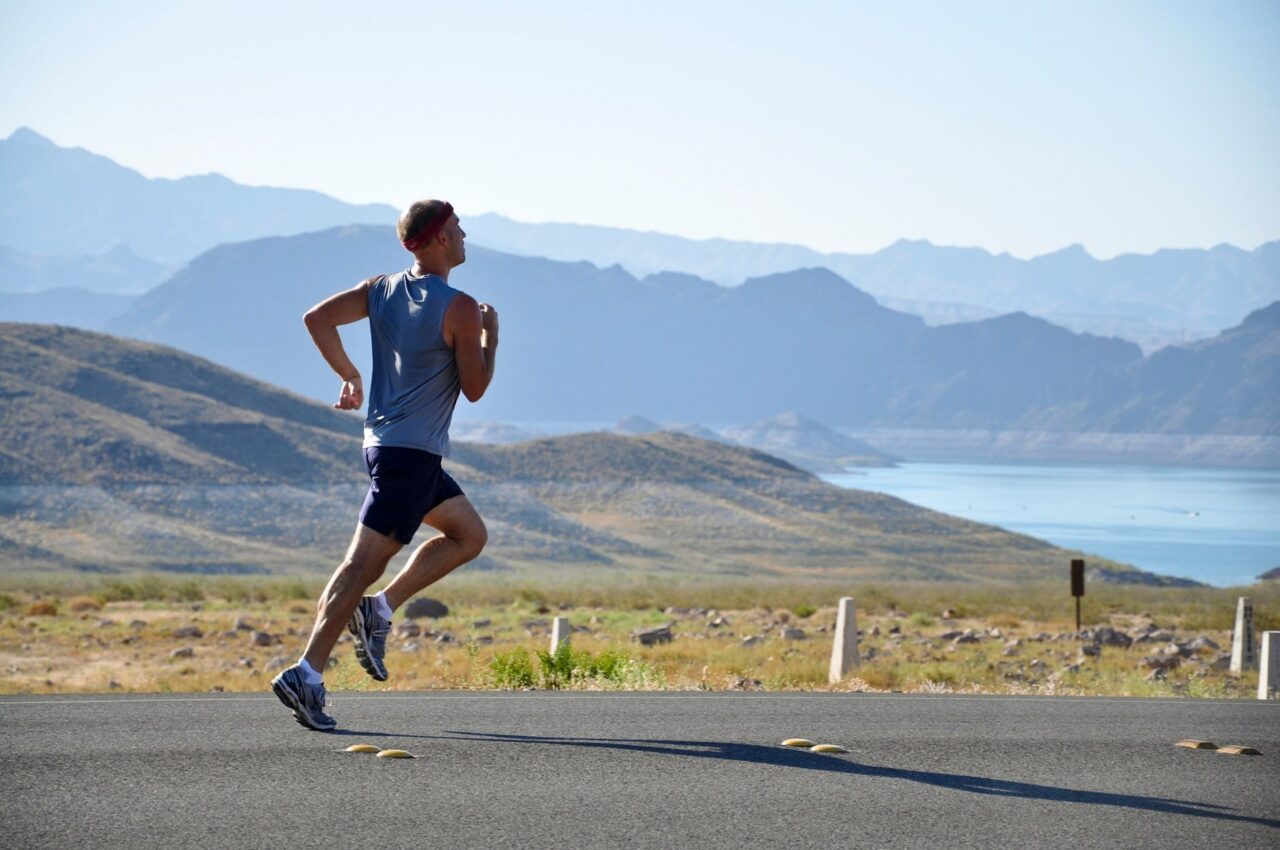 This is one that many people in the running community do know about but probably just don’t do it in the right way.  Weak gluteals and poor hip extension overload the knee and cause knee drift, resulting in pain and injury around the knee.  The gluteal/hip muscles control the femur (thigh bone).

Many runners are professionals who sit for long periods during the day, and often their gluteals have become dormant, and their hips are locked into flexion (bent).

The most effective way to strengthen the glutes is through larger compound movements such as back squats, reverse lunges and deadlifts – but again if your muscles are lazy and not working well, it’s easy to do these exercises without getting the full effect in the target area.

If you’re injured – get proper advice and coaching if you don’t know how to do these exercises well.  You should primarily feel your “butt” ( your hip extensors) work during these exercises but many people feel it in the quads which is exactly what we don’t want (it’s overloading the knee again). 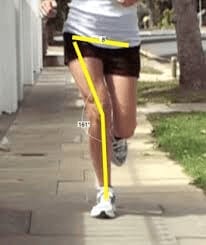 This is when the knee falls inward towards the other knee and the opposite hip drops when the leg is swinging through (see picture below).

These movements often occur in conjunction with each other, if you have one chances are the others will follow.

This causes excessive strain to the structures of the knee and hip is commonly related to pain around the kneecap or outside of the knee. This is a big one that we see in the clinic and is a cause of loads of problems in the body. This can occur due to a range of reasons however a common one is weakness and poor control of the hip muscles namely the gluteus minimus, glute medius, gluteus maximus, and the deep hip external rotators.

Women are more prone to this dysfunction due to having a naturally wider pelvic bone structure, so it’s even more important that the hip muscles are strong and have good control over the knee. Correcting knee collapse and pelvic drop requires strengthening these muscles in a progressive manner.  Basic exercises such as clams, crab/monster walks, or cable resisted hip abduction are a great place to start, but then progressing to faster dynamic exercises is required to control the knee during running. 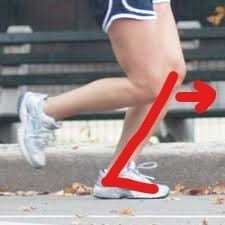 A more crouched running technique may be due to a variety of reasons, however, it is most commonly related to weak calf muscles and poor control of the ankle.

As you can see from the below picture as ankle movement increases while the foot is in contact with the ground, the knee translates forwards over the toes which creates a more crouched running technique. The reason this relates to a knee injury is due to the increased work required by the quads with a greater bend, and the resultant increase in stress on the knee joint. If you have ever held a deep squat or wall sit you will know that it is far more fatiguing than standing with straighter legs.

Again, when one area is not functioning well, the other areas bear the brunt and get injured.  If your practitioner is just treating your knee and not looking at you entire lower limb, pelvis and lumbar spine – sack them today.

If you do have pain, it may be the single thing that helps you to resolve ongoing injuries that, if left untreated, may put an end to your running.

If you are suffering from ongoing knee pain or you just want to minimise the impact on your body so you can run as fast as and as long as you what you want than having a running assessment by a running physio will save you a lot in the long run.

Even if you don’t have pain, at the very least they can help you run more efficiently so you can run further or faster.

I hope this helps you to begin to find the solution to your knee pain.